Are microdegrees a sustainable business model?

As universities move toward unbundled degrees — most often referred to as “microcredentials” or “microdegrees” — we have to ask, “What’s going on here? Is this the next wave in online learning evolution? Is this some sort of shift to blended learning? Is this really about technology at all?”

To answer that question, we need to back up a bit and examine how microdegrees evolved in the first place.

The story begins with the launch of the massive open online course (MOOC) platforms and their migration toward degrees (or parts thereof).

A history of MOOCs

MOOCs first hit the scene around 2012, when Coursera and edX were founded (Udacity was founded the previous year).

Initially, each of these platforms launched with courses that were either produced by, or in conjunction with, major universities and were free for learners to take — a choice that caused many observers to scratch their heads.

What was the business model?

For the first couple of years, it wasn’t clear what business model was going to apply — heck, one of the platforms, edX, was even a nonprofit (and still is).

What we did see was a period of experimentation to discover what would and wouldn’t work to educate students in an online environment at scale, as well as intense effort to grab as many learners as possible.

Although the courses were free (and therefore not profitable), this brought attention to online learning. This new MOOC environment was predicted to change the face of education by making it accessible to virtually anyone with a computer and bandwidth.

The potential was significant; all that was needed was the right model.

So the MOOC platforms sought sustainability by offering the courses for free but then upselling certificates of completion and other credentials at nominal fees ranging from around $25 to $75. 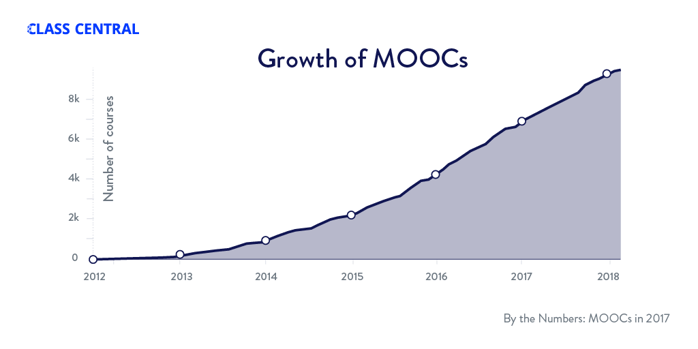 Fast-forward a few years, and it was pretty clear that this initial business model was not working, at least not well enough to achieve profitability — or even sustainability, as in the case of edX.

The revenue generated by upselling certificates was a pittance compared to the costs of acquiring learners, producing content, and running operations. Unless something changed, these organizations were in for some tough times.

Lots of things were tried.

Starting with Udacity in 2014, MOOC providers began experimenting with “shards” of degrees that could either be stand-alone or stackable; in other words, successful completion of several courses could work together to create the equivalent of a partial degree in a subject.

For example, in April 2015, edX launched Global Freshman Academy with Arizona State University, which was an attempt to create and offer the entire first year of an undergraduate degree digitally. Students could take the courses (mostly general education) and, if they achieved satisfactory results, could pay for the courses and earn credits after the fact.

While this specific example wasn’t a big success either, it did pave the way for later experiments that led to the creation of — and ultimately full-fledged commitment to — what is now the MicroMasters programs at edX, which can lead to complete degrees. 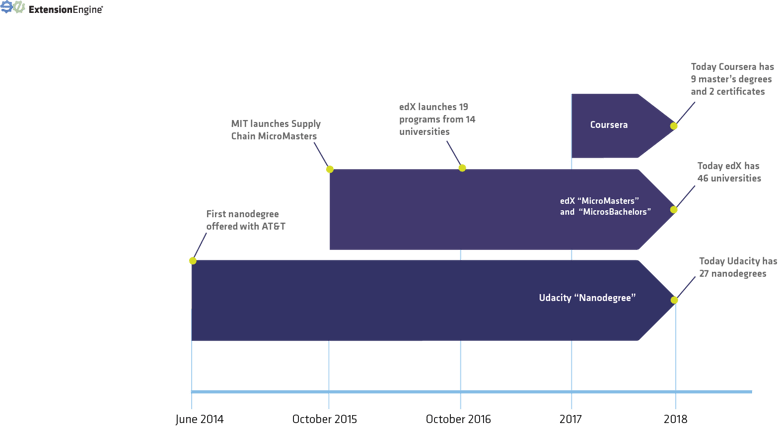 In retrospect, as this graphic clearly shows, this was not a clean transition from Business Model A to Business Model B but rather a very noisy and experimental process.

And let’s be clear, this shift to shards of degrees is not about technology and, frankly, not really that much about learners. Rather, it is about revenue streams for both the MOOC providers and the universities behind them.

This isn’t a bad thing. Without sustainable revenue streams, these providers and the benefits they offer to millions of learners around the world could not exist.

So if a search for a business model is key to survival, then why the shift to degrees?

Well, as the not-so-famous bank robber Willie Sutton said when asked why he robbed banks, “That’s where the money is.” The same is true for MOOCs and universities.

Are microdegrees a sustainable business model?

I do see a big problem with the current crop of MicroMasters programs, at least regarding how well they will succeed at delivering on the goal of generating revenues.

Some MicroMasters allow the student to take only three to nine of the required degree courses online, and the remaining dozen or so courses that comprise the full degree must be taken on campus.For that to happen, the student must be formally admitted to the program.

It’s this second part of these program that could be a potential problem with the business model.

By requiring admitted students to finish their master’s degree on campus instead of online, the number of students who will be able to apply, gain acceptance, and physically attend is greatly reduced, neutralizing one of the most significant advantages of online offerings.

Are microcredentials worth pursuing?

In my opinion, schools would be much better off creating a fully online MicroMasters with both the edX.org and the for-credit portion being offered online.

I would argue that the best platform for this approach would be to use Open edX — which is already being used to offer for-credit masters degrees — as a platform for the courses not offered on edX.org.

Since the two platforms are the same, it would be very easy to shift the line between the MicroMasters and the full degree, with the additional advantage that the students would already be familiar with the learning environment.

Further, institutions could integrate and differentiate — based on their unique pedagogy, brand, or student experience. According to U.S. News and World Report, there are 282 online MBA programs in the U.S., and 31 new online MBA programs were launched in the past three months!

I would argue for a Custom Learning Experience on Open edX for the second half (or even the entirety of) the master’s, as it would provide a better product for the institution and the students.

I suspect that the current blended delivery of the MicroMasters is a transitional form and, eventually, most of these programs will offer the option to complete degrees fully online.

The fact that some of the MicroMasters programs already offer nine (out of roughly twelve) courses online is evidence that such a migration is already underway.

This would make microdegrees not a final business model but a stepping stone to where universities have been heading all along.

This study investigates the prevalence of these four models among 136 U.S. college and universities as a means to identify and define new opportunities for learning in higher education. 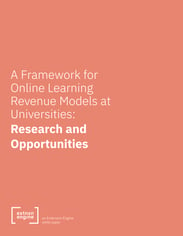